Our Active Bystander workshops are generally 3 hours long for 25-75 participants. They are tailored to your specific group and offer an enlivening introduction to taking constructive action in any or all of the three categories we cover: 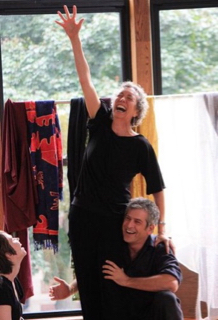 ​Participants work in the whole group witnessing different scenarios, based on real life, and also​ practice ​new skills ​in dyads and in small groups.

Our workshops include two forms of interactive theater: Playback Theatre, to process the emotions that may otherwise get in the way of our stepping in effectively, and action-oriented role plays.

Participants take away a substantial 18-page packet of specific tips and resources. ​ Ongoing practice is highly encouraged, whether through your own organization ​ or peers​, or via follow-up workshop(s) with True Story or other trainers on this website.

“I feel both empowered and equipped to confidently use my voice as an ally.  I’m ready to do this work in a way I wasn’t before.”  -S. Kiser, Dana Hall School

​I learned how to support the target in public, ​and how to name ​t​he harm doer’s emotion​s​ and try to shift their response in a nondisciplinary​, useful​ way​.​ –Sherborn UU Racial Immigration Team participant

True Story Theater also offers performances on many different social justice themes​, ​often with constituencies whose voices have not been sufficiently heard. We have worked with homeless veterans, survivors of domestic violence, cancer survivors, men who were formerly incarcerated, and many others.

​Please ​contact Christopher[at]TrueStoryTheater.org to explore a possible workshop (or performance) for your group.